Portraits of Village Chiefs of The Gambia, West Africa ©Jason Florio
Portraits of Village Chiefs of The Gambia, West Africa - taken whilst on the first circumnavigation, entirely by foot, of the Gambia. 'A Short Walk in the Gambian Bush - 930km African odyssey' The portraits of the chiefs (alkalos), by Jason Florio, would become a multi-award-winning, and exhibited, body of work, called 'Silafando'. His co-leader was Helen Jones-Florio, and they were accompanied by 3 Gambian friends, two donkeys, and a cart (to carry camera and camping gear only!)
expedition, The Gambia, Jason Florio, portraits, Alkalo, village chiefs, photography, Helen Jones-Florio, West Africa, walking, wild camping, donkeys, Gambians, adventure, Silafando, 930km, Africa
20494
post-template-default,single,single-post,postid-20494,single-format-standard,ajax_fade,page_not_loaded,,qode-theme-ver-10.1.1,wpb-js-composer js-comp-ver-5.0.1,vc_responsive

Portraits of Village Chiefs, the ‘Alkalos’, The Gambia ©Jason Florio

In 2009, along with photographer, Jason Florio,  we had a 930km African adventure.  ‘A Short Walk in the Gambian Bush‘ – the first ever circumnavigation, entirely by foot, of The Gambia, West Africa.  As one does. Also, accompanying us on the road were three Gambian friends, two donkeys, and a cart. Throughout the journey, Jason shot what were to become multi-award-winning portraits of the village chiefs (the ‘Alkalos’), and elders, we met along the way. The series is called ‘Silafando – a gift to you on behalf of my journey’.  Helen Jones-Florio 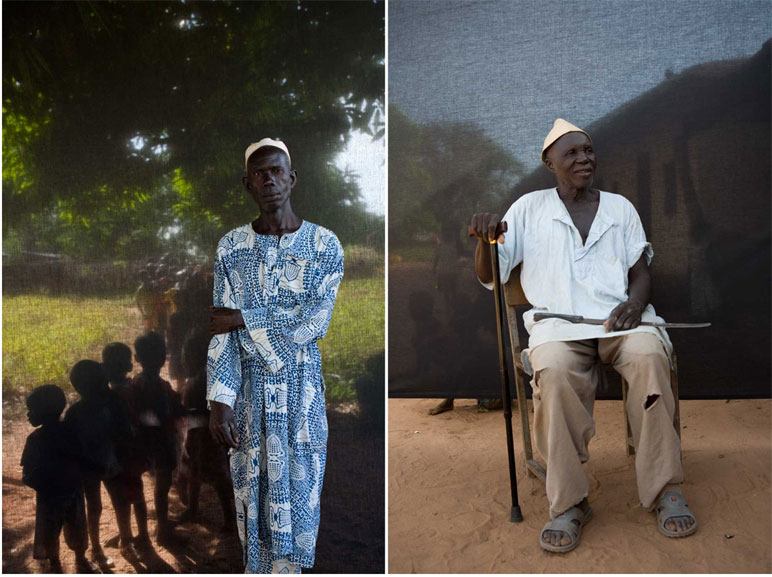 ‘We then realised that the tree was the only real shade in the village. And, something we should have known by that point in our walk, the biggest tree (with the most shade) is the spot where the whole village congregate. To sit and chew the fat, at the end of their working day. So, along they came, a steady stream of villagers, until our campsite was surrounded by extremely vociferous, curious kids, and adults, alike. They brought wooden benches, stools, and plastic chairs. In one particular case, a woman brought her sewing, whilst another two women sat and plaited each others hair. Our team was fast becoming the free entertainment, and amusement, well into the darkness of the evening – rather like (unintentionally) starring in our very own live reality tv show!’ excerpts by Helen Jones-Florio from the expedition blog –  ‘A Short Walk in the Gambian Bush – a 930km African odyssey‘ 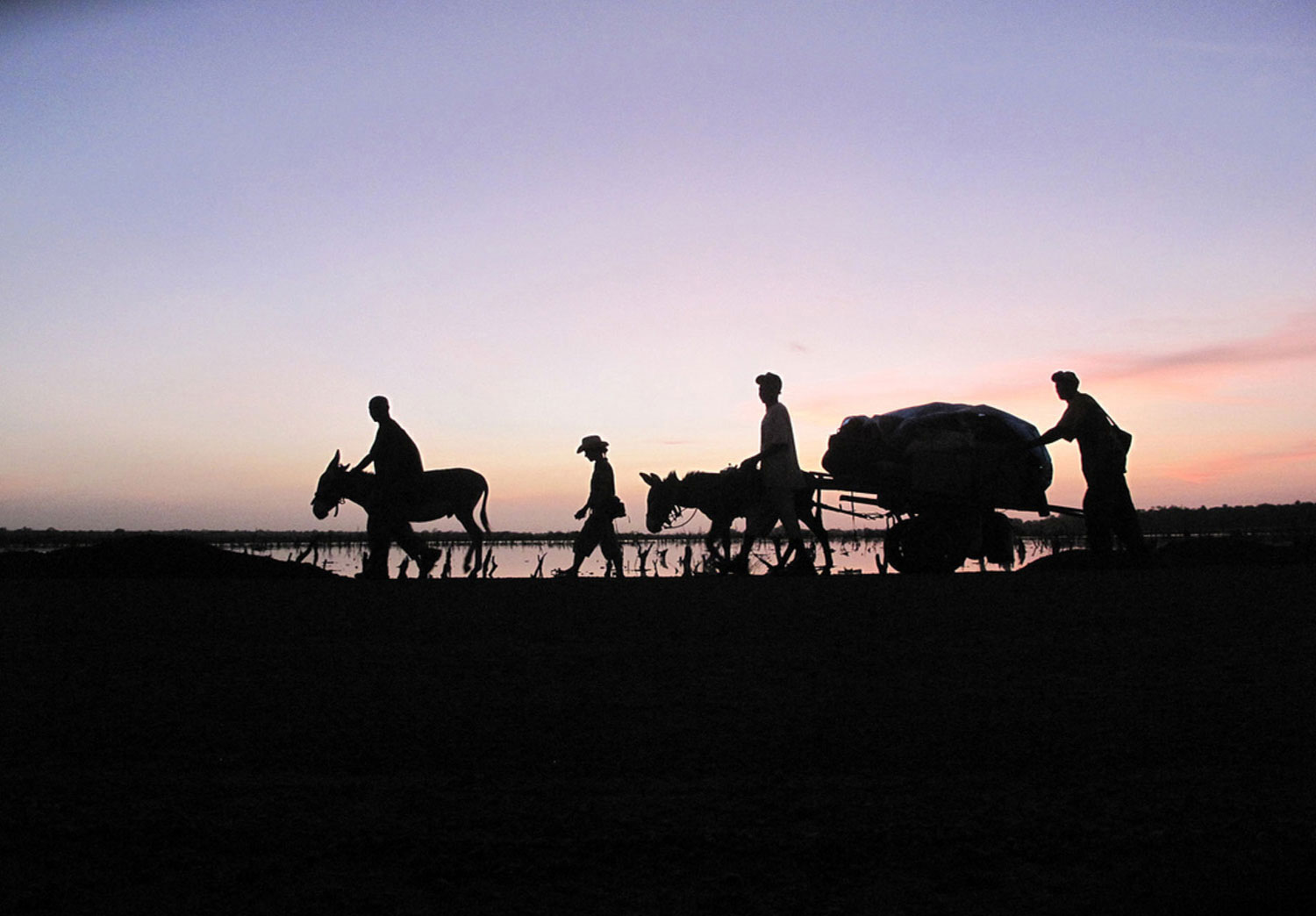 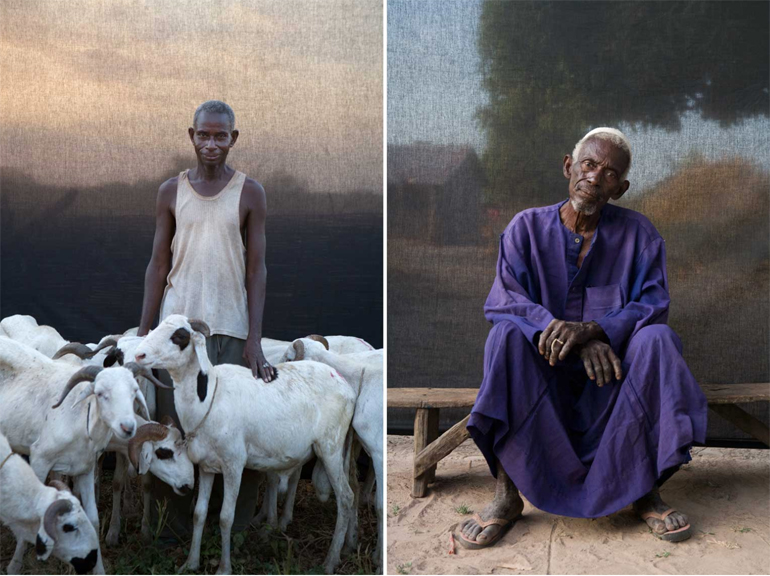 ‘After setting up our camp, Florio makes the portrait of the wonderful old Alkalo, Jare Sowe (in purple, above right. His brother-in-law, and farmer, to the left). There is something almost otherworldly about him that I find hard to describe. There’s a sense of unwavering calmness about him, an unassuming regality, as he surveys everything, and everyone, around him. He has this amazing beatific look on his face as if he knows the answers to every question in the universe…‘ 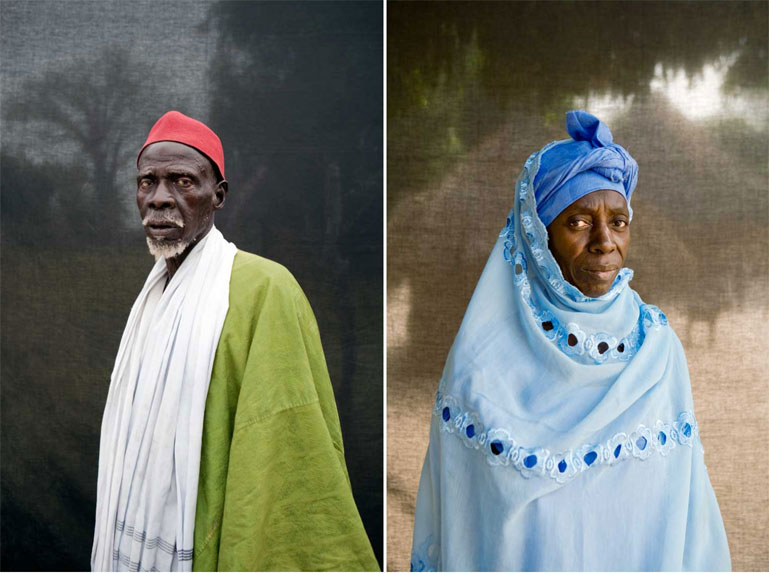 At the time of our walk, there were just five female chiefs in the country. Along the way, we managed to meet four of them, of which Fatou Dansu (above) was one.

‘As we pitch the tents, Fatou returns from the mosque. I knew this was the chief, as I turn around to see a tall, beautifully dressed, woman in an immaculate powder blue grandmuba (robe). Her head is covered with a darker blue ‘musorr’ (headdress). Much like Alkalo Jare Sowe, she too looks positively regal. I notice that she walks with a kind of lopsided-gait as if she has a problem with her right hip. “Al salaam alikum”, she greets us, holding out her hand to shake ours. “Alikum salaam”, we all respond. As usual, I’m feeling decidedly scruffy, in my dusty road wear, sweaty and dirty, as we stand next to this elegantly dressed women. How the heck do people manage to keep clothes so clean here? It’s the never-ending question.’ excerpt taken from the forthcoming book by Helen Jones-Florio 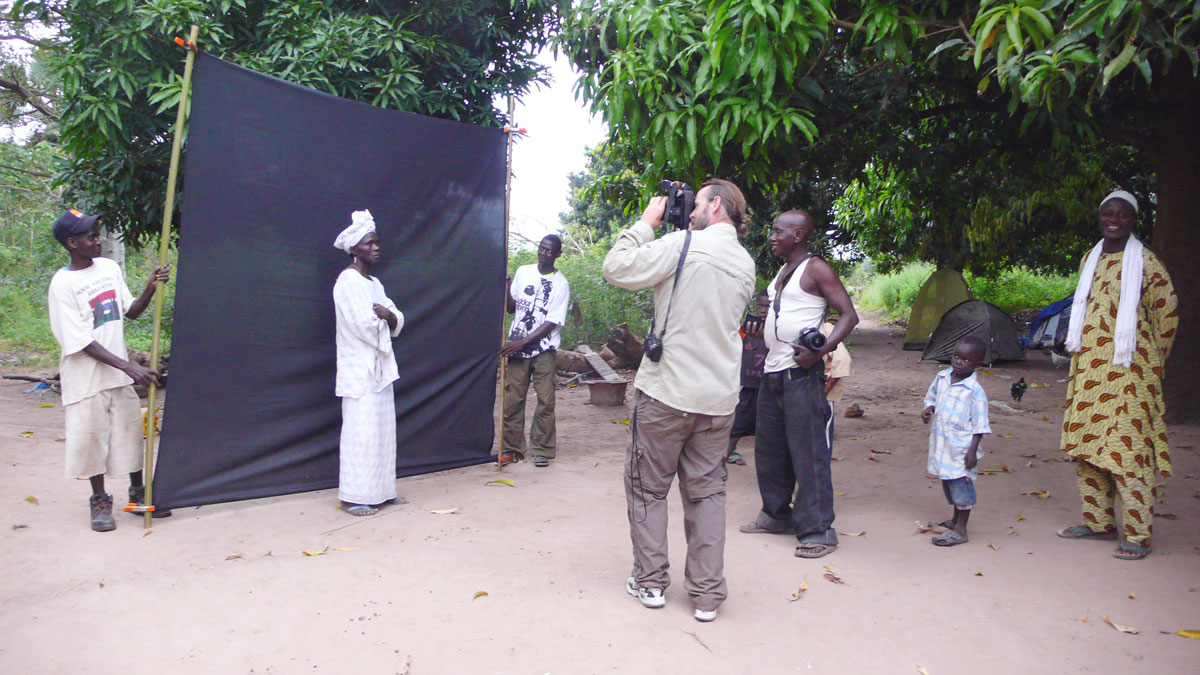 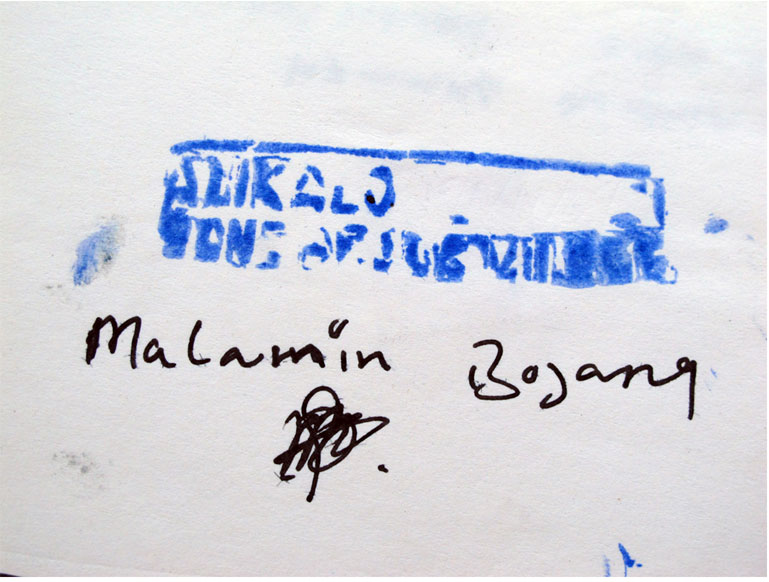 After photographing each of the Alkalo’s, Florio would ask the chief to sign – and use their official stamp – a book which he kept (as his way of mapping the journey). Some of the chiefs signed their names, others used thumb-prints. As it transpired, and the more miles we walked, the book became our introduction to each village. Whenever we entered a village and met the chief, we would explain our mission. And, upon presenting the book, each chief could see who we had already met. Furthermore, and most importantly, the chief could see that we had been welcomed into villages, prior to our arrival to his/her village. The Gambia, being very small, means that all the chiefs know each other or, at least, know of each other. 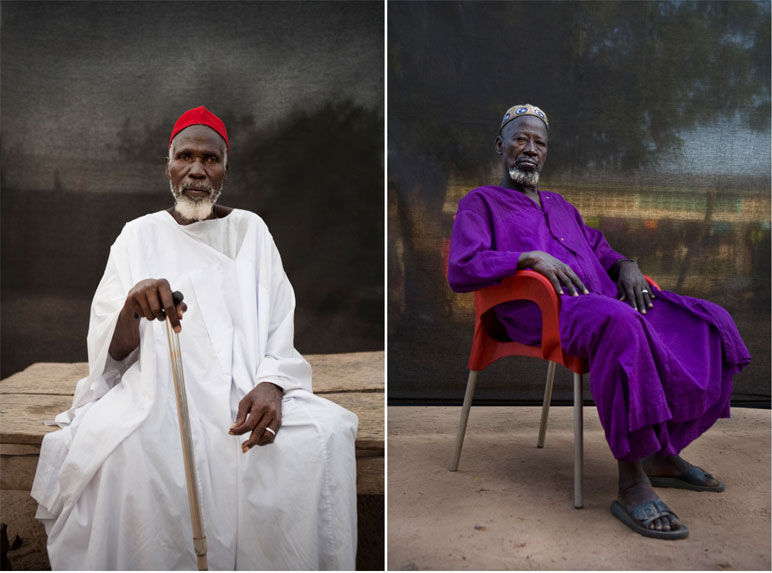 ‘The wheel comes off the donkey cart – again! We wait in Kanifing for a mechanic to re-attach the wheel. We are just short of 20km from the end of six weeks of walking. Frustratingly near to Makasutu (where our journey had begun), yet so bloody far! It would turn out to be the longest wait, and walk, of any of our days of walking over the entire 930km journey. By the time we eventually reach Makasutu, after hours of stumbling around in the dark, in bush, beyond exhausted, leading the donkeys on pieces of rope (having eventually abandoning the cart in a small village a few miles away, where the wheel had come off one final time), and dragging our aching feet, it is 1.30am the next morning!

All part of the adventure… ‘ All above excerpts from my journal, and the expedition blog, for my forthcoming.  Helen Jones-Florio

To view more of Florio’s award-winning series, ‘Silafando’, please visit his website. You may also like to see and read about our River Gambia Expedition. That, however, is another story, for another time…  .

To about our incredible journey, please read/see more on the expedition blog. 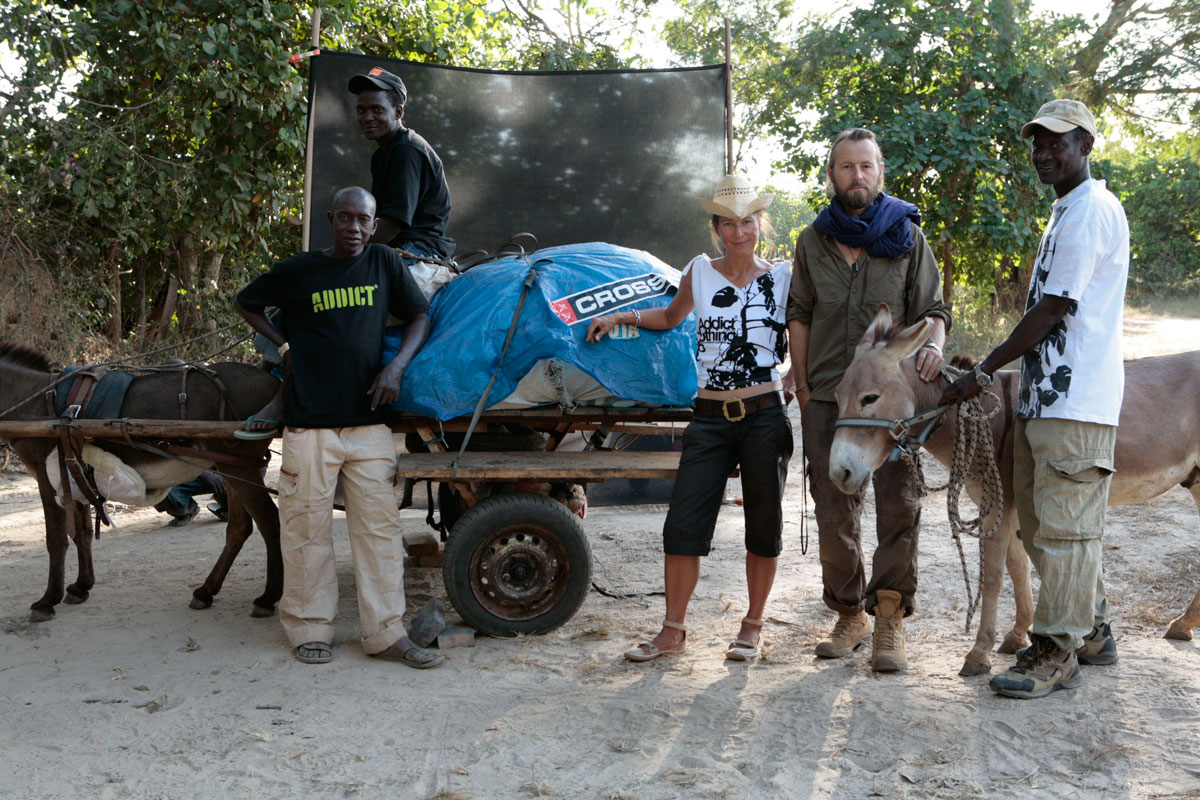